Drawing a postcard from the future

Having worked with over 100 organisations I’m convinced that the major reason corporate change programmes have such a low success rate is because they are communicated from the perspective of programme teams, not the audience. 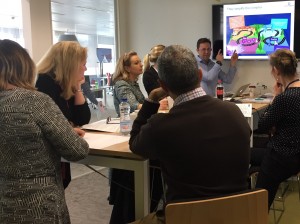 Too often the language is ‘programme speak’ and full of jargon, progress is described in milestones and stage gates, and behaviour changes are practically ordered of an audience.

To break this inevitable cycle, we recently ran a workshop with an insurance company’s change team in their brand new call centre; the challenge was to equip the team to pitch their programme. This seemed simple enough but the programme had been running for over a year, and its reputation wasn’t great, plus the changes were quite complex, and far from sexy.

So what did we do? We brought together eight programme team members, two artists and a couple of communicators. We shut down our laptops, put away all the gantt charts and banned Powerpoint in any form for the day.  Then we talked.

We talked about how the team would justify their existence if their stakeholder asked them to there and then.

We talked about why the programme was formed in the first place, and how it fits with other changes.

We talked about what it would feel like in two years if the programme succeeded. 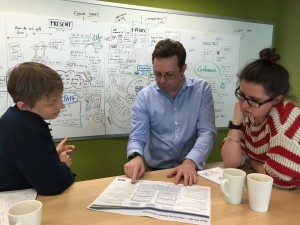 During this time our artists sketched the key points and we captured the language used – after a short while they started talking in metaphors, and using analogies from normal every day life – in other words they started describing the programme in plain English. The jargon vaporised and the passion returned to their voices.

Then over a few hours we worked with the artists to paint a picture of the past – before the programme was set up, present – how the programme formed and what it is achieving today, and the future – what the business will look like and the positive impact the change will have on colleagues, customers and suppliers.  We also developed a set of sticky speaker notes to accompany the visual so that any one of the team could repeat it with confidence.

After a bit of tweaking, and lots of peeking from curious colleagues passing the meeting room, we had a 12 foot visual that revealed a simple, clean and colourful change journey. And of course the visual and script focused on people – what was needed from them, and what impact their support would have on the business and customers.

They say a picture paints a thousand words, and in our case that’s true, after we gave a quick demonstration the team were able to tell the full programme story in a couple of minutes using just a handful of prompts. Even our artists, with no prior knowledge of the programme, could explain the narrative to passers-by.

So what are my personal highlights of day?

Seeing happy clients and those light-bulb moments when suddenly the complex road ahead is less intimidating, the hard work and preparation that goes into these sessions makes it all worthwhile.

A lot of work goes on behind the scenes. It can be exhausting and exhilarating at the same time, but there are also some pitfalls to avoid. In my next blog, I’ll share some lessons learned for using facilitated artist sessions to help embed your company vision.

Was this article useful? Do you have a burning question about communication and how to engage your audience? Drop us a line, we’d love to hear from you.