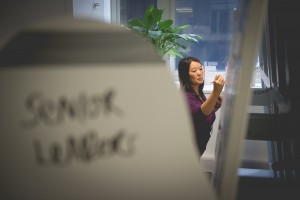 The new host of BBC’s motoring programme Top Gear has been revealed. Chris Evans, TV and radio star, is stepping into Jeremy Clarkson’s size 12 shoes. So what can business leaders learn from the fiasco preoccupying the television industry?

Well after helping over 100 clients deliver complex change programmes we’ve seen our fair share of management reshuffles and takeovers. And we’ve seen how uncertainty during these changes can affect people, especially if there is a lack of strong leadership or limited clarity about the road ahead.

At CommsQuest we’re a team of car enthusiasts and telly addicts. So we’ve seen events unravel and speculation grow about the future of Top Gear with great interest. It’s clear there are many parallels and lessons for the business world to draw from the whole episode.

Here’s our short ABC guide for leaders who want to pack a punch (pardon the pun) when gearing up for a new role – inspired by Top Gear media coverage.

AUDIENCE FIRST: Whatever the challenge, ask yourself where do my people fit into the picture? Already, Evans has encouraged the public with a passion for cars to audition as his co-host http://bbc.in/1emSN9d and he’s been creating two-way conversations via social media to drive engagement even further. As a leader you need to get your people involved and give everyone a voice or some choices – no matter how small. This helps create a sense of ownership in the changes that lie ahead.

BE YOURSELF, DON’T TRY TO MODEL SOMEONE ELSE:  Evans is genuinely excited about his new gig, but some question whether he has been totally transparent along the way. He originally ruled himself out of the job but has since given reasons behind the apparent U-turn in his decision to step up. One thing that hasn’t changed however is the way he describes the show – “Top Gear is my favourite program of all time”. This is not only a great example of using plain English to explain why you’re up for the challenge but it also resonates with audiences.

Oh, and it’s OK to admit mistakes and show emotion too. Listen to Clarkson’s radio interview http://bit.ly/1fjCQkh where he talks from the heart about his sacking.

CHANGE BUT NOT FOR THE SAKE OF IT: Every new leader wants to put their personal stamp on things. But take care not to change too much too soon. So far, the future of show has been described as an evolution, not a revolution with hints at a female presenter in the line-up, or guest hosts each episode. At the same time, remember to outline what’s staying the same. If you’re a fan of the Radio 2 Breakfast show, then never fear, Evans plans to keep presenting it.

So if you’re a leader, don’t burn the past – listen, learn and build on those foundations. Remember the good times. For example, Evans has said he will do everything he can to ‘respect what has gone on before and take the show forward’. He’s even taken presenting advice from Clarkson too http://bbc.in/1eqDUT9

And finally…FOCUS ON THE FUTURE – The last episode now aired pn Sunday 28th June, with the trio of Clarkson, Hammond and May, so it’s time to move on. Clarkson is already planning his next move http://bit.ly/1Fa5ARs with a secret car show in the making and May has just landed his first BBC commission for a live car show too.

So if you’re a leader, look ahead to start shaping your big plans today.

As for CQ, we’ll definitely be watching the new show with interest, and wish Chris and his team the best of luck. But what comes next in the Top Gear ABC guide? What have you observed from the show that could be added to the rest of this guide? Share your suggestions here – we’d love to hear from you!

Was this article useful? If you are interested in learning more about CommsQuest approach to leading through change, why not drop us a line.